My daughter Alice, then an infant, had been diagnosed with an ear infection. Sitting in the pharmacy, waiting for her antibiotics, I called my mom and told her the baby was sick.

“The baby,” she said decisively, “needs a taco.”

Not like a taco taco. A taco for her ear. An ear taco.

It had been years.

In case you’re not familiar—and not even Google seems to know exactly what I’m talking about—my mother was referring to a Mexican folk remedy for earache. You take a cotton ball, dab it in warm olive oil, then fold it around something—maybe nutmeg?—and tuck it in the sore ear.

When my brothers and I were small, it was a treatment dispensed as frequently as cough drops. But it hadn’t occurred to me to make one for Alice until my mom mentioned it. And that bugged me. Even if I had wanted to, I didn’t know how. Why couldn’t I remember? How could I forget? 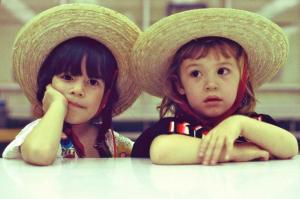 Folklórico me (on the right) with my cousin Maria.

My daughters were among the millions of American babies born to Latina mothers in recent years. Theirs speaks capable if clunky Spanish, wanted a car more than a quinceañera, and spent what probably adds up to months of her formative years at the Santa Anita mall.

An upbringing I’ll proudly claim as authentically Mexican-American as any other.

Still, when it came to my own California girls—while I knew there would be piñatas at birthday parties and tamales at Christmas—I worried their heritage, at least the parts of it they depended on me to hand down, would dissolve in their fair skin and light hair, in their dad’s Germanic surname.

So, pregnant with Alice, I resolved to speak to her only in Spanish. For practice, I spent my third trimester watching breathless telenovelas and listening to dizzying morning shows on Spanish-language radio.

And all the magic words of earliest childhood, words that whisper comfort and love and home—the words for mother and for milk, for tiny hands and feet—fell over us. A flurry of laid-away Spanish, soft as kisses.

Nonetheless, five years later, I realize I have not raised bilingual babies, but children who are becoming fluent in the Spanish-inflected mishmash that was my first language too.

Ask Soledad if she wants oatmeal for breakfast, and she’ll say, yes, she wants avena. (A couple of weeks ago, when we were out of 2-percent, I poured her a glass of skim. She tasted it and said, “No, I don’t want milk. I want leche.”)

Their cat speaks only English, “meow,” but they call her gata.

It wasn’t until I was a young adult, far from home and in the throes of college heartbreak, that I learned to cook Mexican rice.

It was winter and snowy. I buried my hands in my coat pockets and limped to the grocery store, summoning a list of ingredients that I realized only then I knew by heart.

Back at my apartment, I called my grandma who talked me through the recipe that was the quickest way home in a moment that left me wishing for surer footing.

And that’s something I hope I am giving my daughters too—a way back to where they came from.

The really terrific site, SpanishPlayground.net, reviewed Finding the Music not too long ago. While I super appreciate the kind words, what I loved were the reviewer’s great ideas for using the book to help kids learn Spanish. The site is full of fun activities and resources. I might raise Spanish-speakers yet! Check it out.