The Fresh New Face of Griselda is out today! I am so proud to share this book about the courage it takes to find beauty—to create beauty—where it wasn’t before.

That’s the courage my grandmothers taught me.

In the book, Griselda collects teacups because, as my Nana told me once, “It’s good to start a collection. That way, you always have something to build on.”

A few years ago, I wrote this essay about one of my Nana’s collections. I wanted to share it today to celebrate the kind of courage she inspired and the courage I hope readers see in Griselda. 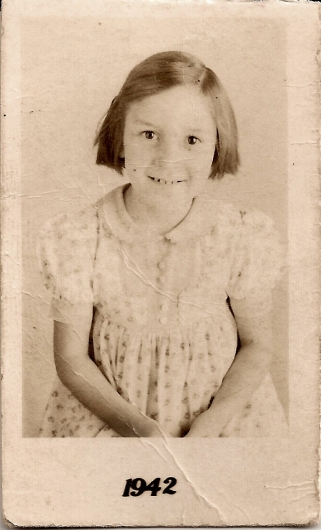 My nana, when she was still Josie Sandoval, bought her first piece of Reed & Barton flatware in 1948. She was 13 years old, saddle shoes skittering over the polished marble floors of Barker Bros. in Downtown Los Angeles. Her mother had taken her there to pick out a birthday present, and she chose silver. Not a full set. Of course not a full set.

Just a piece. A spoon. A start.

She wasn’t sure, at first, which pattern she wanted — something sleek and modern, she thought.

Instead, a saleswoman talked her into a pattern called Francis I, with clusters of plums and pomegranates, berries and blossoms dripping off of each unapologetically baroque spoon, fork and knife handle.

“She said all that fruit would kind of camouflage any scratches over the years,” Nana explained to me. “And now I can see she was right.”

After that first piece, she built her collection a spoon at a time. A ladle when she had saved up enough babysitting money, salad forks for Christmas.

I think of her — standing on tiptoe, perhaps — over a display counter, handling the silver, surprised at its weight. It is an image as charming as her white bobby socks.

But it has occurred to me, too, that underneath my grandmother’s 13-year-old whimsy was an earnest and audacious belief in a future and a family she could not have entirely foreseen, but for which she would nonetheless begin to lay a table. She would create that future—she would fight for it—a spoon at a time.

“Choose your sterling carefully,” a 1940s-era advertisement cautions the soon-to-be housewife. “It is yours as long as you live. … You may change your china completely, wear out your rugs, see your first glasses go crashing with your first years. But your silver is there — beautiful, enduring, unchanged.” 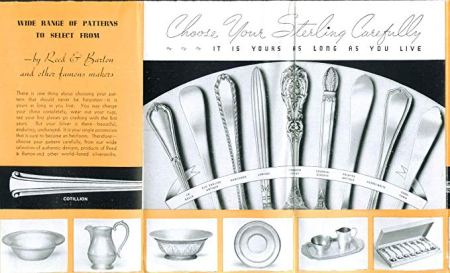 I have few possessions I can imagine lasting as long as I live. Our home is a new area rug unrolled at the foot of a hand-me-down sofa.

Our daughters slurp Cheerios off of mismatched department store flatware. And I often forget that, spoonful by spoonful, those harried breakfasts are becoming  something bigger: The Way We Spent Mornings. That, bedtime after bedtime, we are writing the story that Alice and Soledad will someday tell themselves about Where We Took Comfort.

(“It’s good to start a collection,” Nana says. “That way, you always have something to build on.”)

In 1952, four years after she bought her first piece of silver, Josie Sandoval became Josie Torres. In 1953, two weeks shy of her 18th birthday, she had the first of four children she and my grandfather would raise together. 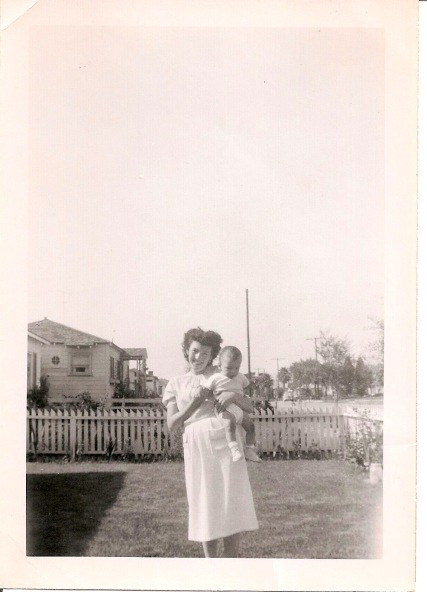 “We were real poor when we were first married,” she told me. “And your granddad, he would feel so bad that I couldn’t buy any more silver, that when he finally got his first paycheck, he gave it to me and said, ‘You go shopping and buy some silverware.’ Well, I shopped all day long, and all I bought was a pair of pants for him and a bonnet for the baby. And then I opened a checking account. I never did finish my collection.”

Not too long ago, on her 80th birthday, Nana gave me her silver chest: 10 teaspoons, nine place knives, eight salad forks, nine place forks, two butter knives, an oyster spoon, a cream soup spoon, a gravy ladle and a jelly server — not just an heirloom, but an inheritance. Finished and unfinished. A constant work in progress. Something beautiful to build on and to fight for.

To me, watching the cover of a new book take shape is one of the most exciting parts of the publishing process—the moment when you begin to see the story come alive in someone else’s imagination. And I couldn’t have been more charmed when I saw the cover art created by UK-based illustrator Lucy Truman for The Fresh New Face of Griselda. It perfectly captures Griselda’s uncertainty, but also her quiet courage and determination. I was thrilled when Lucy agreed to share a little about her creative process: 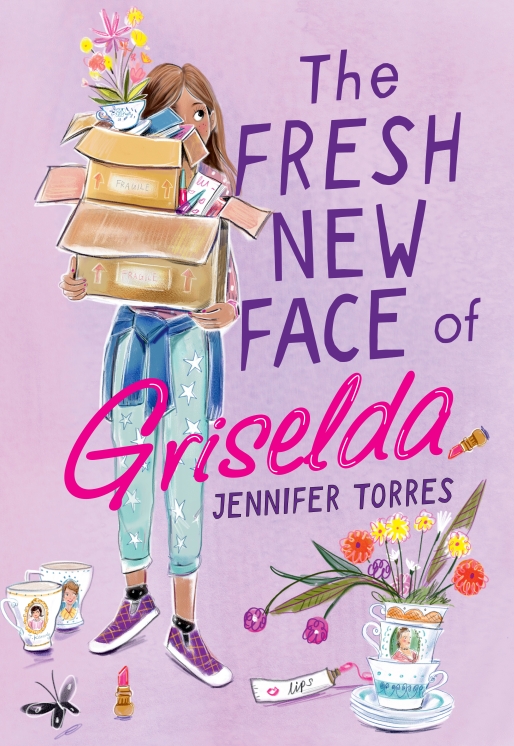 When I first learned you would be creating the cover art for GRISELDA, I was especially excited because of your work in fashion illustration, which I love. Can you say a little about your fashion influences and how you carry them through your children’s book illustration?

Yes, fashion does indeed influence my ideas, thoughts and artistic style. I love it! And can’t get enough of it. I suppose I carry it through into my children’s book as it is a big part of my interest. I love looking at children’s fashions as much as adults. Having an 11-year-old daughter, inspires me directly and indirectly. Having her as an accessible model, (even if she does moan and refuse occasionally), with her own style and likes, gives me an insight to the preteen age group, and helps me to characterise the “girls” I draw, in a modern and contemporary way. Indirectly, I am made aware of the world and interests of this age group, seeing things she has been viewing on Instagram, or Tik Tok, and her being a huge fan of Ariana and Billie Eilish, educates me as to what “sassy” girls are all about. I guess it is about being educated through my daughter, and going shopping with her helps a lot too 🙂

Creating the ‘look’ of a fictional character seems really daunting to me! How do you approach it? (Your version of Griselda feels exactly right, by the way. I remember thinking, ‘Of course. That’s her!’)

To “get” the character and nail what she is about, the formula is simple when it comes to illustrating a fabulous book such as yours! The story ignites me and I can really imagine her, and she will automatically come to life on my paper! I loved your book as it had real substance and had a modern feminist subplot, which I adored. I haven’t read anything quite like it before now or since. It really struck a chord. It had the right mix of fun (which we all love to escape with), but with a great message of resilience and empowerment. I loved Griselda, and thought she would have a characterful quirky look but still girlie. If that makes sense? 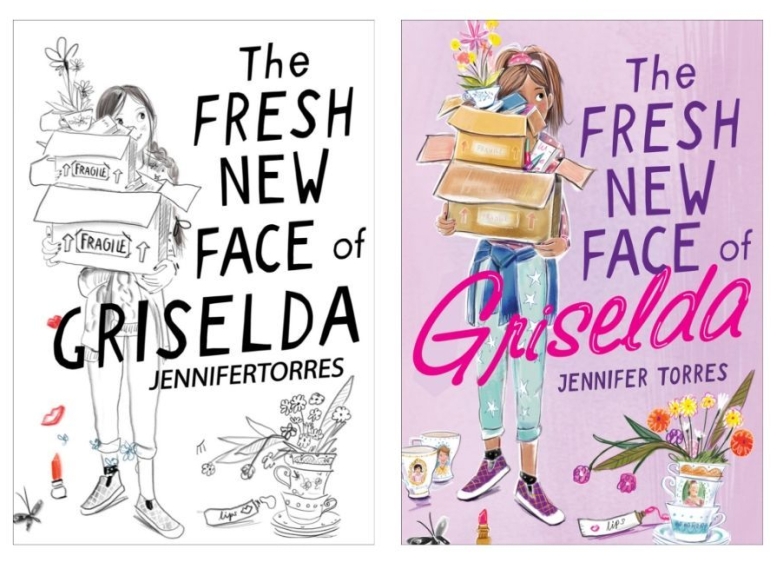 At left, a very early sketch of the cover. The version on the right is closer to final with color, a lip-glossy font, and First Lady teacups (also a ponytail!)

Some of my favorite parts of the cover are the teensy details like the lipsticks and the nail polish and the garden tools—and, of course, the First Ladies teacups with the even teensier First Lady portraits. Did you have a favorite to draw? Was it Jackie?

Mine too, Jenn, I loved those details. The art direction was great, and I think the recipe of your writing, the creative forward thinking of the art director and my art was just such a perfect match! [Note: The cover was designed by Marie Lawrence]. I loved the idea to draw the teacups, the First Lady idea was wonderful for me and something that added substance for young readers. It wasn’t just an empty sugar candy cover, and for this reason it really interested me. It educates young girls about things they probably will not know about. And, yes, you are so right, I loved drawing Jackie, but also the close second place would have to be Nancy! 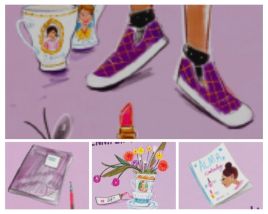 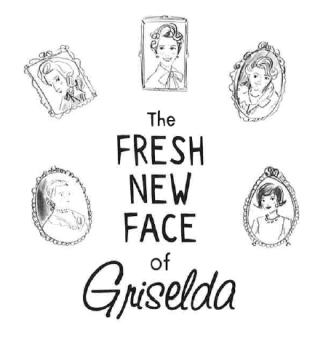 I know you have a daughter. What kinds of stories and illustrations most capture your attention and imagination as readers?

She and I like very similar books, and realism is key for Ava. She likes to read stories which are about her, essentially, with a character she can either emulate, aspire to be or feel empathy and understanding with. That is why we both love Griselda. Ava isn’t really that interested in fantasy or adventure. Having said that, she does want excitement and adventure in her books which are realistic portrayal of our society and environment.  She gravitates to American literature more than British, as she consumes so much popular American culture she seems to want to become American herself! She is a massive fan of Sofie Dossi, and watches American’s Got Talent on YouTube.

Lucy Truman is an artist/illustrator specializing in fashion and beauty, travel and lifestyle illustration. She is also a renowned children’s book illustrator and enjoys drawing for many well-known publishers in both adult and children’s genres. The importance of elegance, stylistically and thematically, is an integral part of Lucy’s work, embodying retro beauty whimsical twist. See more at lucytruman.com. Find her on Instagram at @lucytruman_illustration, or on Twitter at @iLucyT.

I can’t wait for you to meet Griselda. She’s braver than she thinks, a fighter for certain.